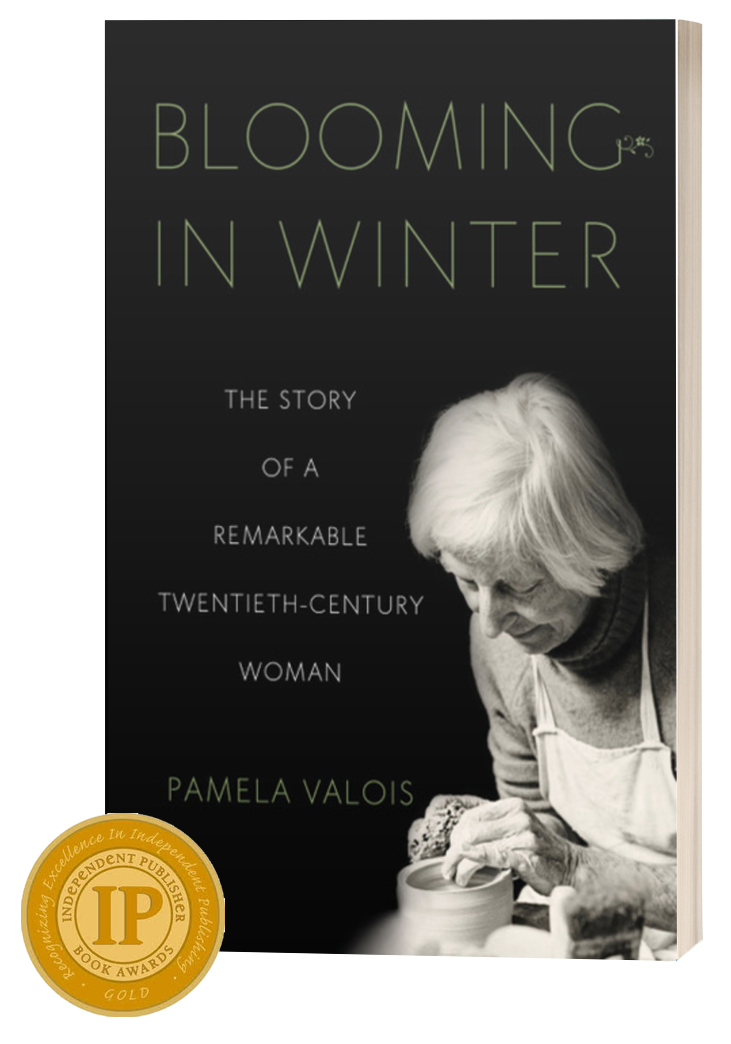 Blooming in Winter: The Story of a Remarkable Twentieth-Century Woman

When Pam Valois met her in the 1970s, Jacomena Maybeck was a model of zestful, hands-on living and aging, still tarring roofs and splitting logs in her seventies. Pam was a young working mother trying to carve out time for creative projects, and Jackie became her mentor. Their friendship led to a best-selling book, Gifts of Age, that features her portrait and those of other exemplary women in the winters of their lives.

Decades later, when Pam and her husband bought Jacomena’s home in the Berkeley hills, she realized how little she knew of Jackie’s fascinating life. What had shaped and supported Jacomena in living “at full tilt” until her death at ninety-five? Blooming in Winter tells this tale, one that stretches from Java to a magical house designed by Jackie’s famous father-in-law, Bernard Maybeck. It chronicles her early years as an immigrant and ranch girl and later as a bohemian, mother of twins, ceramicist, widow, and ultimately the steward of the Maybeck legacy. Along the way, Jackie became an old woman who lived with grace and aplomb. Her uncommon approach to life encourages us to reflect on our own lives and what it looks like to live exuberantly to the very end.

“Blooming in Winter is the biography of a fascinating woman who managed to live her long life to the fullest…. Although Jackie is not famous outside of Northern California, this biography reveals her to be a woman worth knowing. In contemporary American society, which favors youthfulness, Jackie showed that…it is never too late to begin something new.”
─Foreword Clarion Reviews

“Navigating widowhood and grappling with the onset of old age, Maybeck embraces her independence and freely explores all artistic inquiries…. A reverential celebration of a feisty woman with a zest for growth, art, community, and dynamic living. This careful consideration of an extraordinary life emphasizes creative expression and the strength of womanhood.”
─BookLife Reviews

“[This] biography focuses on a venerable woman who left her mark on Berkeley, California. Valois’ careful selection of quotes from Maybeck’s contradictory, ‘Rashomon-like’ diaries are deployed to great effect, furthering the vision of a charming woman anyone would love to know…. [T]he account feels like a nostalgic conversation about a deeply loved, mutual friend. An engaging and detailed portrait of a 20th-century woman and the communities she tended.”
─Kirkus Reviews

“While Blooming in Winter presents the specific story of Jacomena’s life in a legendary family, it shares themes that are universal to all women—the challenges of fitting in while maintaining independence in a circle of large personalities, the struggle to find creative outlets and realizing your passion, and gracefully aging while change is all around you. It also paints an intimate portrait of Bernard Maybeck the architect, artist, husband, father and grandfather.”
─Jan Berckefeldt, Executive Director, Maybeck Foundation

“In Blooming in Winter, photographer and writer Pam Valois introduces us to her friend and muse, Jacomena Maybeck, and reveals an insider’s vision of Maybeck life and architecture. Carefully curated and based on letters, diaries, interviews, and extensive research, Valois’s collage is a compelling portrait of a fascinating woman who provides a glimpse into how to balance dark thoughts with small pleasures and live fully at any age.”
─Ruth O. Saxton, author of The Book of Old Ladies, and Professor Emerita of English, co-founder of the Women’s Studies program, and founder of Rhetoric and Composition program at Mills College

“Beautifully written, filled with family conflict, love and suspense, the story of Jacomena Maybeck is the tale of every woman and her struggles to find her voice and create a life on her own terms.” ─Louise Nayer, author of Burned: A Memoir, an Oprah Great Read.

“Blooming in Winter portrays my mother, Jacomena Maybeck, lovingly and as realistically as she was in life. It tells the tale from her birth in Holland to her death in the splendid house she made her home. Valois has a fine ear for my mother’s wit, and an eye for the secrets her life reveals to those of us seeking a good old age.”
─Adriana (Cherry) Maybeck Nittler

“Planted in the soil of the Maybeck family and flourishing within its embrace, Blooming in Winter is an absorbing tale and a graceful retelling of a woman’s life. Widowed at age sixty-one, Jacomena Maybeck seeks—and finds—her own identity as an artist and storyteller.” ─Sandra Butler, author of It Never Ends: Mothering Middle-Aged Daughters.
“Valois’ rich narrative portrays an ageless woman who also epitomizes a particular time and place. Jacomena Maybeck marries into the family of a famous California architect, and proves, through her own genius, that to create a house is also to create a home and a life. Near the end of her life, Jacomena wrote, ‘Age comes when appreciation is gone.’ Pam Valois shares with us an appreciation of this remarkable woman. ─Tina Gillis, author of Where Edges Don’t Hold, Finalist, Maine Literary Award for Maine-themed non-fiction, 2018.
“Through our shared passion for conserving Berkeley’s architectural heritage, I came to treasure Jacomena’s wit and her devotion to the legacy of Bernard Maybeck, the great American Arts and Crafts architect. She would hold court over house tours, showing us how graceful architecture enriches and shapes our lives.” ─Anthony Bruce, Director of the Berkeley Architectural Heritage Association.
Scroll to Top